Windy S. Wiper was manufactured in Detroit Michigan, and she is the car of parents Heada Liner and Dash Board. Several years ago, she was plucked from a wrecking yard in Bakersfield, California. She was restored to her former glory courtesy of the fine folks at Teresa's Garage. 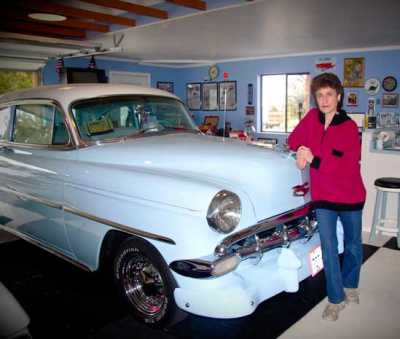 Teresa Aquila owns a fleet of 13 classic vehicles, all of which she completely restored herself.

To say that Teresa Aquila takes life by the reins is the understatement of the century, because ever since she can remember, she’s been doing it all without slowing down.

At age 63, Aquila doesn’t have a pause button—only forward, and that’s the way she prefers it. She has been injured on the job as a mechanic, shot as a reserve cop and marginalized by men in the automotive industry at every turn, but she keeps coming back with more fervor and determination than ever before.

As a renowned mechanic, columnist, teacher and the producer of a popular auto repair radio show for women, not to mention a policewoman, Aquila isn’t afraid to take chances and follow her dreams. Her mechanical career has spanned more than four decades, working on everything from Porsches to heavy equipment, including her personal fleet of classic vehicles—all of which she restored herself.

Aquila’s weekly radio show, “Teresa’s Garage Radio Show,” is broadcast on 1180 AM KCKQ every Tuesday at 2 p.m. PST. Her show’s tagline is “Empowering Women One Wheel at a Time,” dedicated to women who dare to be different and desire to become more knowledgeable of car care.

Aquila’s show deals primarily with mechanical repair, but occasionally includes various topics that are related to the collision repair industry.

“We’ve presented topics like how to find a good body shop, the differences between aftermarket and OE parts, the telltale signs of a bad body shop, and recently we interviewed Rocco Avellini, the founder of Wreck Check Centers about how to avoid shoddy collision repairs,” she said. “The show’s overall theme is to educate women about cars and how to repair them, in order to protect them as consumers.”

“I got a job working on a fleet of ice cream trucks, and I learned a lot by observing their mechanic,” she said. “He taught me about brakes, engines and carburetors, and later how to prep and paint a car. It gave me a good start in the industry, but after that it was a battle, because no one wanted to work with a woman.”

Today, there is the “Me Too” movement, but back when Aquila was working in the automotive repair industry, there seemed to be an “Anybody But You” movement. Her career as a mechanic taught her a lot of valuable lessons, and the main one was “Never quit…ever!”

“I worked for 10 years at a place where I was the only female mechanic and the guys never accepted me,” Aquila said. “They sabotaged my work or gave me ridiculous jobs to do that were demeaning. When they saw that I wasn’t going to quit, they threw all of my tools on the roof and told me that I was taking money out of a man’s pocket.”

Now celebrating her 41st year as a Washoe County reserve sheriff, Aquila serves and protects the community without collecting a paycheck. It’s an arrangement she is happy with, because it allows her to dictate her schedule and participate in a lot of programs that are dear to her heart.

“When I first started, I got the graveyard shift and realized I could not do this,” she said. “So I retained my reserve status and work 30–40 hours weekly now. I receive the same training and was promoted to lieutenant 10 years ago. I’m involved in neighborhood watch efforts, coordinate high-profile events, do public speaking and meet with the community to hear their concerns. It’s a great job and I love it!”

“I was at another call, when a report came over the radio that told me that a high-speed chase was coming my way,” she said. “Here comes a vehicle at 120 mph coming right at me. It swerved and missed me by 20 feet, and I can still see the driver with his window cracked and a gun in his right hand. He smiled at me like he was saying ‘You’re dead,’ and then I heard a loud crack. I thought I had blown a tire, but then there was blood everywhere.”

Still in pursuit, Aquila became faint and had to pull over after traveling about eight miles. The chase eventually ended when the perpetrator committed suicide, and later it was discovered that he was wanted on murder and drug charges.

“I was lucky, because when he shot at me, the bullet went through both of our car doors before going through my leg. Six months later, I was back on the job. People thought I was going to quit, but I’m in it for the long run,” she said. When she isn’t chasing bad guys or producing her radio show, Aquila is writing a book about her life and maintaining her fleet of 13 classic vehicles.

“I love all of my cars, but I do have a special place in my heart for my 1954 Chevy Bel-Air, because I did all of the bodywork on that one myself. Every one of my vehicles is drivable and I still have [my] very first car—a 1963 Chevy Impala that I bought when I was 18,” she said. Even though her career as a mechanic hit its share of speed bumps along the way, Aquila still believes that women belong in the automotive repair industry.

“I tell young women all the time that it’s still a male-dominated business, but if you stay focused and put your best foot forward in anything you do, you will be successful,” she said. “Don’t ever let anyone dissuade you on your journey, because we’re all on the same road—even though we’re in different cars.”

Autobody News is a publication of Adamantine Media, LLC Copyrights. All rights reserved.

Windy Wiper gets a Banner